Five Storey Projects (FSP) (founded 2008) was a curatorial collective founded by artists, writers and curators. FSP was an organization that favored an interdisciplinary approach to artistic production and an active exchange with the institutions and galleries they worked with. All projects gravitated towards questions of self-organisation and sub-cultural structures as a form of resistance with a strong emphasis on artistic and curatorial collaboration. 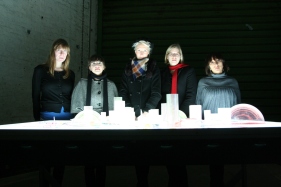 Highlights from over five years of collaboration: